The Cameron Highlands circa 1955 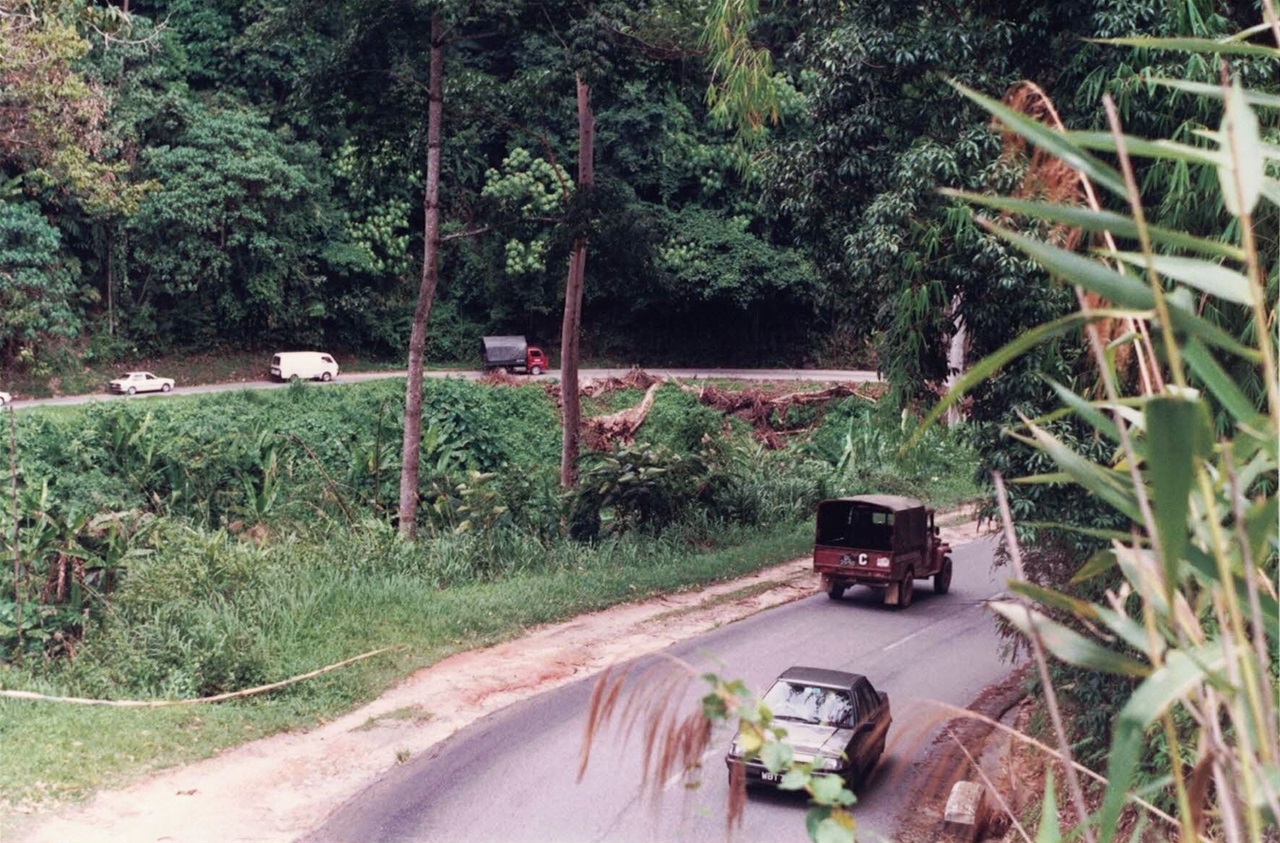 The Cameron Highlands road 1991. Photo taken by the writer on his 1959 Zeiss Ikon.
This section of road was ambushed by Communist Terrorists within months of the events detailed below.

A Personal Vignette of Malaya

Father and I regularly spent breaks at the Cameron Highlands. One weekend we drove up in the new Rover 90, joining the military convoy mid-morning on Saturday. I had noticed that father was a bit liverish but I, in my child’s-mind, put it down to the previous night’s enthusiasm at the mess or wherever he had been. As we drove up he was sweating profusely even as we reached the delightful cool air of the mountains.

We arrived and this time we didn’t stay at the Smokehouse but another guesthouse, slightly higher than the golf links, a magnificent old house with marvellous grounds for me to play around in. To my disappointment father went straight to bed to ‘lie down for a little while old chap’ he said to me.

I thought nothing of it, with new gardens to explore, the beautifully terraced rose beds and the belt of jungle below. I was struck at the time by the mists enveloping the surrounding mountain peaks and the unbroken stretch of jungle beneath me.

Later in the afternoon I went up to see father who was lying between sweat-soaked sheets, tossing and turning and shivering fitfully. He asked me to get the house boy to provide some blankets, which duly arrived and piled around him.

Father didn’t come down for dinner that evening; I sat in the large dining room, on my best behaviour, surrounded by families and couples enjoying the evening. I remember the room had a large fireplace with a roaring fire. After dinner I went back up to see father who was asleep but tossing and turning and muttering loudly in his sleep. I left him and went back downstairs to the sitting room, again with a well-lit fire and snuggled down to a book.

I must have fallen asleep by the fire because I remember being awakened gently by a strange but concerned lady who suggested I should go to bed. The fire had died down to its embers and there was a distinct chill in the room. I went back upstairs to check on father.

He was wide awake and covered in sweat. His face was white and the bedclothes were sopping. He asked me to see if the house boy was around and to see if I could find him a cup of tea. By good fortune I found the house boy and the bed linen was changed and a cup of tea was duly delivered to the room. We talked for a while and father explained that it was probably just a ‘touch’ of malaria that he had picked up in India. He assured me that he would be all right in the morning.

I returned to my room and slept the sleep of the childhood innocent. The next morning was cold. There was a distinct watery film over the window and as I jumped out of bed I knew it was going to be a cold day. I hurriedly dressed and went to see father. He was lying in his pyjamas on top of the bedclothes, still sweating and obviously in some distress. He greeted me weakly and asked if I could find him a cup of tea. Being that early there was no one about and I hadn’t a clue how or where I could make tea. I did however find a fridge with some milk in it. I poured a glass and proudly returned to the bedroom. Father, who never drank milk, gulped it down and asked for more. We finished the milk.

I do confess that by this time I was becoming worried. Father was dropping intermittently in and out of sleep. As soon as I heard the house boy about I sought him out and explained that father was still not well. Again we changed the bed linen. A little while after that I recall we were visited by a young man with the proverbial black bag who introduced himself as Captain so and so the resident doctor. The doctor prescribed some coloured tonic and what looked like giant horse tablets.

I was despatched outside to ‘play’ which I did with enthusiasm. I do remember that there were a couple of other children with whom I played an enthusiastic game of cowboys and Indians. During the morning father rallied a little and by lunch time had got up and seated by the window with a cup of tea, wearing a dressing gown and reading the paper. We chatted awhile, father telling me some stories about mother and a funny story about running a convoy in Germany. He had a bowl of soup and then said that he was tired and would go to bed. I was disappointed as I thought we might have gone for a drive to the waterfall – but that was that.

I spent the afternoon by myself reading next to the fire – they had some illustrated magazines of London with pictures of the Queen and some glorious advertisements for shopping and lots of horses and hounds. It reminded me of Germany with my father dressed up in his hunting uniform with the hounds.

Again I must have dozed off, it was very comfortable in the little parlour with its frosted windows, when the manager came looking for me. He was as I remember a very tall man; father was evidently calling for me. I went up little suspecting what I would find. He had evidently been sick because the room smelled of carbolic, a pile of sopping sheets lay in the corner and he was lying on the pillows as white as the crisp bed linen.

He wanted me to sit with him and held my hand. We sat thus for what seemed to be an eternity. He would wake and chat quite lucidly and then drift off into incoherency and then into fitful sleep. That evening my dinner was brought up to the room by the manager’s wife, who assured me everything would be all right.

The following morning, to my unspeakable horror an army ambulance arrived at the guest house and two stretcher orderlies tramped up to father’s room. With memories of the last time two such orderlies arrived at our house, I am afraid I put on a bit of a turn. The manager’s wife tried to restrain and comfort me and explained that father was being taken to hospital in Kuala Lumpur.

Thereafter ensued quite some discussion as to what to do with me. I was insistent that I was to travel with my father in the ambulance, the orderlies were not so keen, the manager’s wife said I could stay there and father was in a delirium. At that moment the doctor arrived in uniform and the matter was settled that I was to travel in the back of the ambulance on one of the stretchers.

Accordingly father was carried out on the canvas stretcher and strapped in place – given the nature of the highland roads, a wise precaution. I was left to my own devices on the adjacent stretcher. Anyone who has travelled in the back of a three-ton army ambulance, in convoy under the threat of ambush, driving down-hill along the most winding roads in Malaya will appreciate the journey. The foul and all pervasive smell of antiseptic mingled with faint engine fumes, the grinding of gears and whining brakes, tossing this way and that was enough to make anyone sick. And sick I was. Father, mercifully strapped in and lost in semi-consciousness fared better. And all the while I was terrified that my father was about to die. Recurring images of that winter day in Germany remained at the forefront of my mind, interspersed with the groans and ramblings of father and the whiff of cigarette smoke wafting in through the vents.

Our arrival at Batu Cantonment came as blessed relief after hours of hell. Father was hospitalised for several days and I think I remember spending several days at the hospital myself. Of this I am not sure. I do know that when father was fit enough for service he had lost so much weight his usual immaculate uniform seemed to sag like a sack on him. And his first concern – for his prized Rover that he had to leave in the Highlands.

Thank you Aroha for your kind words. It was for me a time of close encounters.

Images burned in your brain, a rather frightening experience for one so young. Great Picture.

Thanks Sam. It was quite a time. Absolutely correct about the images. It is a great camera - if it could talk!

John, what a wonderful read, I was quite emotional reading it especially as I can remember you at that age and of course dear Uncle Frank. It made it all the more poignant

Thank you Jane for your loving comment. You're quite right, this happened some twelve to eighteen months after we stayed with you in London.

In my humble opinion, has to be included, as it is an important part of your life. Amazing and despite the awful time you must have had, a joy to read.

Thank you Marlies for your kind comments. I shall re-consider my book. They were interesting times.

Yes, it is important to include it. That incident was one of many which helped to shape your life. Please put it in - it is a very poignant moment in your life

Thank you again Colin - I will certainly reconsider and try to find an appropriate place. Blessings.

So enjoyed reading this and just want to go on reading more. Beautifully written.

I very much appreciate your comments Lesley. It was at times an odd childhood. Such jottings come with the loving memory of my parents much to the fore.

A sad and moving account I can only imagine what you must have been going through. But thankfully Uncle Frank made it through i hope this it going to be in your book

I really want to read more. I was taken away into a foreign land when I was reading. I hope you will put more on this site.

Thank you Col, very much. It was awful. I actually decided not to include it in the book, but if you consider it worthy ...?