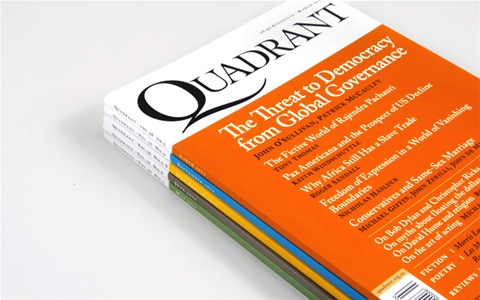 I received the following e.mail this morning from a dear friend and former colleague - a poet, novelist, journalist, lawyer and public intellectual:

A quite wicked thing has happened. The Literature Board of the Australia Council has cut off Quadrant Magazine’s grant entirely, while increasing grants to left-wing magazines such as Overland, Griffith Review and the Australian Book Review. All these are receiving grants in six figures. Quadrant, the only conservative magazine with major literary content, is rejected. You may read the details in Quadrant Online.

This is a deliberate attempt to destroy the only major forum for conservatively-aligned culture in Australia.

Quadrant is not a fly-by-night organization. It is 60 years old, has published nearly 600 issues, and has always been a steadfast spokesman for conservative-liberal-democratic values and an enemy of extremism.

Quadrant readers have been acutely aware of the increasing pressures being put on the magazine by the increasingly pernicious progressive liberal elite that control the purse strings to the national ‘Arts’ scene in Australia.

Many of you might well have heard me, or perhaps read my views, on the ‘culture wars’ being waged not only in this country but throughout the Western World. These wars refer to the clash of ideas and competing worldviews. They describe the continuing conflict between traditional and conservative value systems and the antithetical liberal progressive agenda. A person’s worldview –what one holds to be true - is shaped by personal experience; family and upbringing; education; friends and social surroundings; the media; work – in short – everything in life that has shaped that person into being what he or she is.

I, for example, am a moral conservative but a political freethinker. I have strong views on certain moral questions, including "Life, Liberty and the pursuit of Happiness" to quote the United States Declaration of Independence. Moreover, again reflecting the Declaration, I firmly believe my Creator gave me these rights and obligations and that it is the primary object of government to protect them.

My complete opposite would be an Étatist [F. état state]. Such an individual would argue that all knowledge lies with those in authority because they alone possess ‘the truth’. Thus empowered those in power would argue that a hierarchical form of government is preferable to democracy. Indeed, given a chance, my complete opposite would prefer the total control of the ‘State’ over the individual citizen.

Freedom of speech and expression is a fundament of a free society. The media in all its variations is a manifestation of such freedoms.  Most of the media is privately [or corporately] owned, thus it is independent of the state. The state does however in some liberal democratic countries choose to subsidise a section of the media. Public broadcasters such as the ABC and SBS in Australia are almost totally supported by the state. Furthermore, many cultural media vehicles such as community radio stations, ethnic specific newspapers and so forth are subsidised to some extent by the state. The state also subsidizes in part the activities of scholarly journals such as Overland, The Australian Book Review and Quadrant. The latter however has been receiving an ever-decreasing share of public subsidies. Now it has been cut from the government purse completely.

The reason for this is unashamedly political. The arts grants decision makers have seized upon the fact that Quadrant enjoys a comparatively healthy market share compared to the various and generally unreadable liberal progressive journals. This has provided them with the perfect excuse to cancel Quadrant’s funding completely. This is completely unfair inasmuch the grant received by Quadrant was minuscule and well-deserving. It is extremely difficult, if nigh impossible, for any cultural magazine of the scholarly quality of Quadrant to stand completely alone in the relatively small Australian market place. Nonetheless it does a remarkable job in comparison to its competitors. It is this point, together with the fact that it is a journal reflecting a conservative worldview, which irks the cultural apparatchiks responsible for the dispensing of monies.

A little about Quadrant.

It is a distinctly Australian literary and cultural journal. Quadrant reviews literature, as well as featuring essays on ideas and topics such as politics, history, universities and the arts. It also publishes poetry and short stories.

Quadrant has a proud history of standing up for cultural and political freedom. It was founded in Sydney in 1956 by Richard Krygier, a Polish-Jewish refugee who had been an active social-democrat in Europe and James McAuley, a Catholic poet, famous for the anti-modernist Ern Malley hoax.

The journal was an initiative of the Australian Committee for Cultural Freedom. This association of scholars, artists, public intellectuals et.al. was an offshoot of the international Congress for Cultural Freedom which was at the forefront of the cultural defences against the Communist inspired, subsidised and influenced intellectual publications of the Cold War period. It is the remaining survivor of the prestigious group of like publications which included Encounter [UK]; Preuves [France] and Monat [Germany].

Some critics have alleged that in the 1950s Quadrant enjoyed some funding through the Congress for Cultural Freedom from the US Central Intelligence Agency. This might well have been the case. So?

Correct or incorrect, given the vicissitudes of the period it is far from dishonorable to have indirectly received funds from the agency of a like-minded and liberal democratic ally rather than from the Russian and Chinese Communist dictatorships that directly funded several Australian leftist publications in that period.

Although the journal does not resile from its conservative views on political and social issues, the foregoing amply illustrates the depth and breadth of its compass. Irrespective of individual politics I firmly believe it is a journal that is well worthy of support.

To this end, I urge you to consider taking out a subscription either in hard copy or online - perhaps even a small bestowment for the sake of the continued publication, dissemination and exchange of ideas!

Please take time to view the Quadrant website at https://quadrant.org.au/about-us/  or, for further information, don’t hesitate to contact them direct:

[Note: Donations to the Quadrant Foundation are tax deductable].

The culture war gets filthier. I second our host in appealing to all to send a donation to thwart the leftist bullies and censors. Also suggest writing to the PM and Minister for Arts.