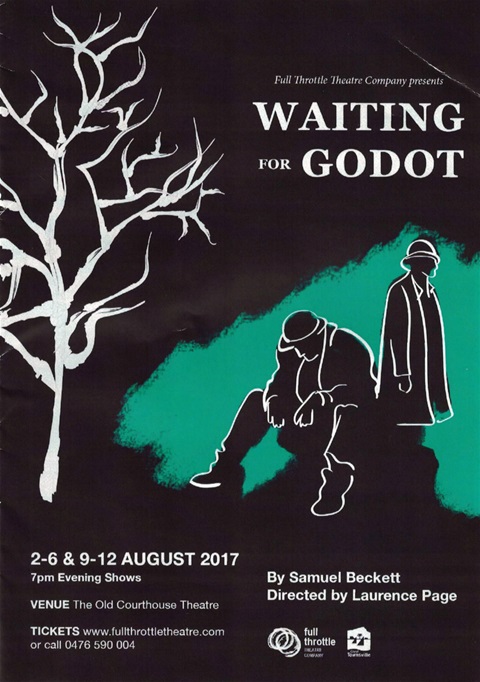 I saw a superb production of Samuel Beckett’s timeless masterpiece, Waiting for Godot over the weekend.

Writing in an age of genuine intellectual inquiry, where words had meaning and were crafted and appreciated, Beckett’s dialogue stands as a wonderful example of the music of language against today’s mindless and ear-grinding jargon.

But about the play.

Performed by Townsville’s Full Throttle Theatre Company under the supervision of tyro-director, Laurence Page, Beckett’s classic was in sound hands.

Written in 1952 and first performed in January the following year Waiting for Godot established Beckett as one of the preeminent playwrights of a theatrical genre that become known as ‘theatre of the absurd’. The notion of absurd is derived from the existentialist view that our spiritual and cogitative limitations determine us to be perpetually destined to confront the total absurdity of existence.

In the context of the increasingly dystopic nature of our C21st world Beckett’s haunting underclass characters, enslaved by their own fears, remain a timely and eloquent reminder of the ultimate absurdity of life and contemporary society.

We are of course, all waiting. The penultimate lines of the play summarise this mood:

Estragon: And if he comes?

But of course, we know that he isn’t coming: but hope, just as Ibsen’s ‘Saving Lie’, springs eternal. Whether we hang ourselves or not, the end comes to us all finally.

Aside from the most pertinent use of Simon and Garfunkel music and the opening bars of classic heavy metal, Page, to his great credit, resisted the temptation to adapt or embellish the play or the set to suit the ‘contemporary audience’ - code for ‘dumbing down’. I have seen a couple of unfortunate productions of this play, particularly one in Melbourne set in a council yard amongst rubbish bins and paper bales.

His directing was faithful to the script, from Estragon’s iconic opening line – “Nothing to be done” - to the inexorable conclusion – “Yes, let's go.” And they remain motionless.

Yet within these two punctuation marks of inertia the play seethes with emotional and intellectual energy and confusion.

To concentrate the minds of an audience for two and half hours on taut and pithy dialogue is a triumph in itself. The audience, which included a pleasing number of school agers, remained in thrall. All five actors were well cast and their individual performances were without doubt exemplary. Power, sensitivity and intelligence are descriptors that readily spring to mind.

Arguably the standout performance for the evening was Lucky’s powerful stream of consciousness requiem for the soul. This piece is a notoriously difficult monologue to master – to render Beckett’s deliberately disjunctive, repetitive verse intelligible whilst maintaining the requisite cadence, ejaculation and final agony of completion requires a degree of empathy and discipline not readily possessed by all actors. This monologue usually evokes differing responses from the audience. For an odd reason the evocative performance I witnessed awoke in me an appreciation of the cycle of hope, agony, despair and futility of the French Revolution. Freedom, after all, was what the Luckless Lucky deserved. But, chatting with Page after the show, he reminded me of Germaine Greer’s observation that there is nothing as fearful as freedom!

Although formally described as a tragicomedy I have never found anything particularly comic about the play. Certainly it contains some amusing throw-away lines and some wonderful contrapuntal dialogue, but comic? Certainly I have seen actors ham it up in quasi-camp style to the complete detriment of the spirit of the play. Such are usually confined to undergraduate productions. It is a bleak play. And Beckett’s bleakness was admirably complemented by an equally bleak set: comprised of a white sheet, a stylised tree and a few white snow-covered oddments of a rubbish tip. No, there were certainly no distractions from the dialogue.

Full Throttle Theatre Company is based in the old Court House Theatre, Townsville. The company has a lineage extending from 1986 and linkages with James Cook University. It is a youthful company that relishes tackling the mind challenging classics - be they Greek tragedies or Nineteenth and Twentieth Century moderns.

It delivered Beckett’s play with verve, panache and professionalism. It is a delight to report that stimulating regional theatre is very much alive and well in north Queensland.