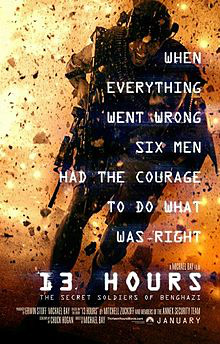 13Hours: The Secret Soldiers of Benghazi.

On the evening of 11 September 2012, the eleventh anniversary of the 9/11 attacks, a force of Islamic militants attacked the American diplomatic mission and a nearby CIA compound in Benghazi, Libya.

The only American force immediately available was a small group of heavily armed but outnumbered CIA ‘security contractors’, comprising former Marines, Seals and other special-forces veterans. These undertook a desperate rescue and defence operation. In the ensuing battle four Americans were killed and ten wounded. The dead included U.S. Ambassador J. Christopher Stevens, the first American Ambassador to be killed since 1979. Some 100 militants were killed.

This is a film to be seen on several levels.

It is quite obviously a film directed towards a certain political market, namely the American primaries and the November presidential election. Given that the film addresses a disgraceful episode in America’s history of covert operations and given that one of the real life protagonists is standing as President, this is understandable. Pleasingly, the director plays down direct political comment and allows viewers to form their own opinions based on the content of the film.

It is however a film that works much more deeply from a military perspective. It is a film that graphically illustrates the frightening sense of being swept along by events rather than shaping the direction of combat – which is so often the case.

In this particular instance the Americans involved were combatting a shadowy and opaque enemy – such is the nature of guerrilla warfare. In this context, their adherence to the rules of engagement and self-discipline in combat is commendable.

The film has attracted many reviews, most of them predictable. The reviewers of the liberal progressive press have universally panned the film. I read one shocker by the abominable Guardian – I shall not dignify that paper or the author by providing my usual citations – suffice it to say the reviewer complained that the acting was wooden, that there was no characterisation, the film was too political, that the combat scenes were over the top and so forth.

This clown completely missed the point inasmuch this film starkly portrays the type of urban combat confronting our ground troops in the Middle East today. The technical aspects of the film are very good. The fact that it was filmed on location in Morocco and Malta, with the full assistance of the Moroccan Government and its military, provides a distinctive ‘reality’ to the film.

The film highlights the on-ground confusion of close-quarters combat. It succeeds in achieving its sense of ‘realism’ precisely because the acting was ‘wooden’. The point of military training is to meld individual identities into the collective identity of the team. In the context of the film, the confusion of not knowing sometimes which character is which indicates the director’s intentions – to illustrate that in combat you sometimes really do not know where the enemy is or where your mates are.

The point of this film is that it is designed for the public, not an effete group of liberal intellectuals. Moreover, any film that wants to get its message through to the public has to hammer home the message.

This is not a subtle film.

The film’s message is, quite simply, that there existed in Benghazi a covert group of American mercenaries employed by the CIA to monitor the burgeoning arms trade in post-Gadhafi Libya. The separately housed American diplomatic mission in Benghazi was attacked by Islamic forces associated with ISIS. The security arrangements at the diplomatic mission were manifestly inadequate and the only military force available to effect any form of defence or rescue of the Ambassador and his staff was the covert CIA group. These were not given permission to go. After much time-wasting on diplomatic niceties and orders to stand-down the group took the initiative, disobeyed orders and went in on their own volition. Had they not have taken that initiative the bodies of the Ambassador and his staff would likely have been de-capitated, paraded in public or suffered some other gross form of public indignity.

As it transpired Ambassador Stevens lost his life but his body and his staff were rescued and taken back to the CIA compound. Thus were the assailants denied the pleasure of publicly humiliating their enemy. The question as to why the American mercenaries were not given the go-ahead is the subject of political debate. However, irrespective of politics, the affair that has become known as the Battle of Benghazi was, in plain Anglo-Saxon, a thorough cock-up.

It was however an action in the true spirit of American individualism. It was unsanctioned, heroic and a spray of common sense and humanity by the ordinary soldier into the Byzantine byways of American diplomatic bureaucracy.

It is a film that depicts the American military psyche and tradition at its best. These were heroes that broke the rules, went in and did the job on their own initiative, grit and combat experience. On this level the film has all the ingredients of Mom’s Apple Pie. Sure, to the liberal intelligentsia it might have its corny moments, but these only serve to reinforce the sobering truth that this tragedy actually occurred and, in all likelihood, could have been prevented.

The fact that the liberal press and its reviewers haven’t liked the story does not make it untrue. Indeed, the fact that they haven’t been able to cast doubt on its credibility, adds weight to its value to history and to public debate.

If you like military action, if you are concerned about events in the Middle East or if you have a broad interest in current affairs this film is definitely worth watching.