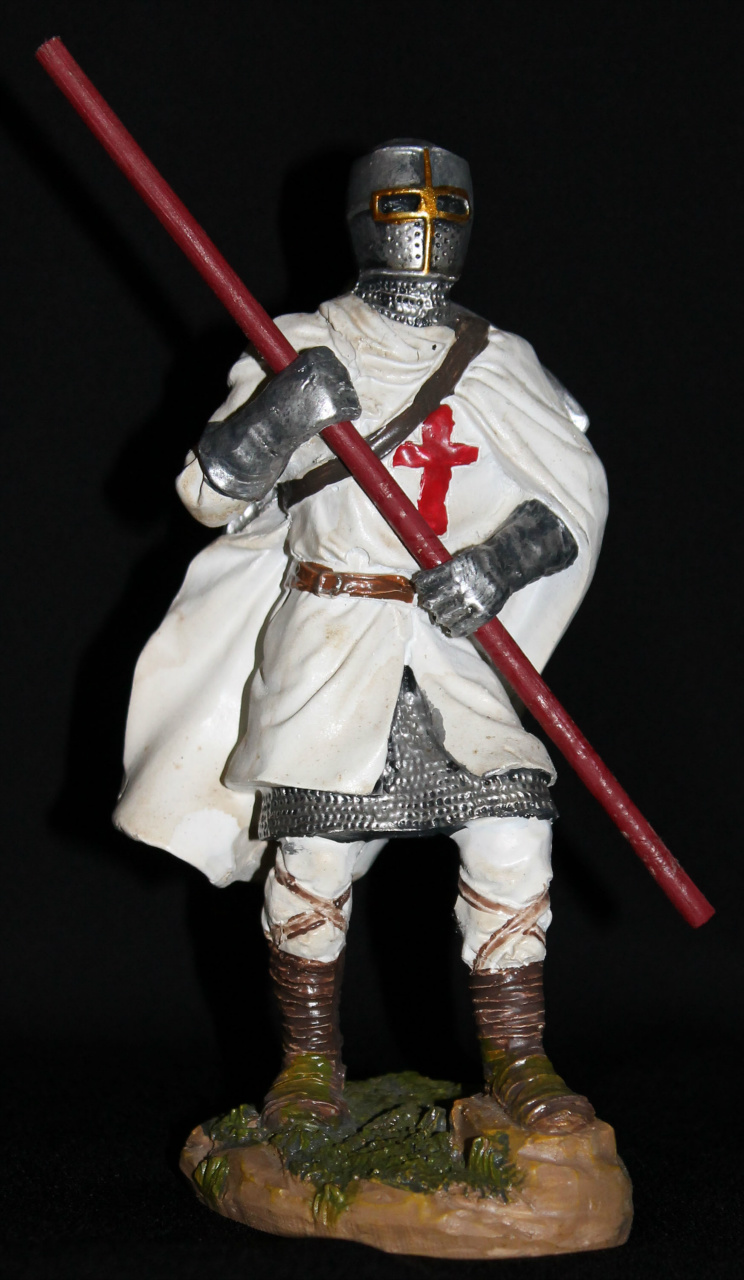 Today marks the 700th Anniversary of an event that had both its genesis and exegesis in Biblical history; an event whose context still swirls throughout the Middle East and whose consequences helped shaped the modern world.

At around the hour of Vespers [sunset] on Sunday the 18th of March 1314, Jacques de Molay, Grand Master of the Knights Templar and his Preceptor of Normandy, Geoffroi de Charney, were burnt at the stake on a small islet on the River Seine in Paris for heresy. The islet, Ile de des Juifs [Jews], was the property of the Augustinian order of monks; legend has it that long after dark some monks collected the bones for private burial with the martyrs.

Thus ended the final chapter of one of history’s most beguiling stories – the story of the Knights Templar.

Much has been written about this still enigmatic order of warrior monks. Some of this literature is arrant historical nonsense belonging rightly to the genre of popular fiction. A larger portion of this corpus may be classified as being of the esoteric genre, suggesting plausible historical theories and raising as many questions as they answer. Finally, there exists the academic and professional histories that endeavour to cut through the myth and legend of this romantic and bloodthirsty epoch of history known, popularly, as the crusades [1096-1291AD].

This is not the place to rewrite or examine this history, but rather, in commemorating the event, to provide a background perspective to the ongoing geopolitical tragedy we call ‘the Middle East’.

To return then to our Templars is to start at the First Crusade. Promulgated at the Council of Clermont in 1095 and called by Pope Urban II, this reconquered Jerusalem for Christianity in 1099. Born out of the success of this crusade was the order of the Poor Fellow-Soldiers of Jesus Christ, established in 1119 by a French knight, Hugues de Payens. The self-proclaimed role of this order was to protect pilgrims to the Holy Lands. The newly installed King Baldwin of the then Christian ‘Kingdom of Jerusalem’, allowed them to establish their headquarters on the south-eastern side of the Temple Mount. Given that this was formally the site of the Biblical Temple of King Solomon the order became known as the Knights of the Temple, or quite simply - the Templars.

Over the next two hundred years the order grew to be the most powerful and richest of the military orders of the crusades. The history of this period is a fascinating subject worthy of further reading. Suffice it to say here that, with specific Papal blessing, the order became in effect the first multinational and standing army in the Western world. They became pioneers of international banking and enjoyed unchecked authority to travel through Europe - subject only to their Grand Master and the Pope himself.

One historian has described the medieval ideal of the Holy Roman Empire as being ‘remarkably similar’ to that of the founders of the European Union. He observed that the demise of the Templars: “marks the point when the common good within Christendom became subordinate to the interests of the nation state, a process that the world community is now trying to reverse”.[1]

In the context of this emerging medieval nationalism across Europe it is unsurprising that some viewed with suspicion a large multinational army in their midst directed by a powerful and autonomous order responsible to no-one but themselves and the Pope. The machinations of King Philip IV of France in destroying the Templars reflect this very temporal suspicion and envy. The dramatic demise of the order effectively ended the ideal of the Holy Roman Empire and heralded in the era of the nation state.

The rapidity and completeness of the Templars demise also demonstrated, through the excesses of the Inquisition, the efficacy of physical torture; applied psychological enfeeblement and constant propaganda in shaping societal and individual consciousness. That a once all-powerful; well-respected and religious order devoted to the church could be dismantled, discredited, dispersed and effectively disavowed from history in less than a decade stands as a testament to the powers of coercion. It foretold the tools of totalitarian governments to come.

Other contemporary parallels to the crusades can be seen in the fanatical resistance to the Kingdom of Jerusalem vis-à-vis the rejection of the state of Israel by the Muslim, particularly Arab, world of today. In taking the fight to the Western world modern Islamic militia and terrorist groups doubtless take some inspiration from the Moslem legends of Abu Bakr, Saladin, Jalal al-Din Rumi and Memed the ‘Conqueror’.

Such contemporary ‘Swords of Islam’ as the Palestine Liberation Organisation; Hezbollah; Al Qaeda; the Al Aqsa Martyr’s Brigade and Islamic Jihad, to name but a few, superficially mirror the exploits the legendary Assassins; Mamluks; Saracens and Seljuks in their aim of furthering the faith, territorial gain and ending foreign dominion.  In doing so, they claim justification, in part, by pointing to the alleged illegitimacy of the Christian crusades seven centuries ago.

The crusades are perceived in both Western and Islamic cultures as the first manifestation of Western imperialism. This view is understandable in terms of the Muslim historical narrative. That it has been perpetuated for so long by Whig and liberal historians of the Western world is less understandable – because it is wrong.

What is largely overlooked in the debate about the crusades is that they were, in fact, a reaction to aggressive Muslim expansion along the littoral Mediterranean threatening the foundations of the Eastern Christian Church in Constantinople. The idea of the crusades was to reclaim the Holy Land, not to claim them! There is a subtle and distinct difference.

It should be appreciated that, from the outset, the Prophet Mohammad preached with the sword. From the period 622, the accepted beginning of the Muslim era when Mohammad led seventy families from Mecca to Medina [the hijrah /migration], until his death ten years later, he resorted to, or was forced to resort to arms at least four times. After his death in 632 it is fair to say that the history of Islam and the middle and near east is a litany of schisms, internecine wars, territorial conquest, violent upheaval and shifting centres of political power extending into the present day. Those doubting the veracity of this need only to examine the historical record.[2]

One of the core problems of the Middle East is the intractable question of Jerusalem. Arguably one of the oldest cities in the world [first recorded settlement circa 4000 BC] Jerusalem has been sacked, rebuilt and sacked countless times. The spiritual home of Judaism for centuries, it has since the first century AD also been the font of Christianity. Although not the birthplace of Jesus it was certainly the location of his Crucifixion and Ascension. The Roman Emperor Constantine rebuilt the city as a Christian city, completing the Church of the Holy Sepulchre in 335. After the decline of the Roman Empire Jerusalem remained under the aegis of the Eastern Church and Byzantine Empire.

The Byzantines were destined to clash with the rapidly expanding Muslim Arab Empire. In 638, after a protracted siege, the city of Jerusalem fell to the Muslim armies. The conquerors set about establishing Jerusalem as one the holiest cities in their empire, along with Mecca and Medina. In 691the Dome of the Rock was completed marking the point of Mohammad’s ascent to heaven. The relatively benign Muslim rulers allowed the Jews back into the city with the freedom to live and worship – having been banished by the Romans four hundred years previously! Thus the city was confirmed as being sacred to the three monotheistic religions of the world.

Consequent to continued and protracted conflict with the Muslim armies, the beleaguered Byzantine forces suffered a major defeat in 1071 by the Seljuk Turks at Manzzikurt [eastern Turkey]. In 1094 the Byzantine Emperor formally requested military assistance from Western Christendom and the era of the crusades was born.

Although the excoriation and final execution of the Templar leaders will doubtless remain a footnote in history, their death deserves greater recognition. In the broader scope of history it is readily apparent that the Templars were a product of their times – they served their church well and when their usefulness was over they were, in effect, sacrificed on the altar of geopolitics. The execution of their twenty third and last Grand Master served as the handmaiden to a new era in European history.

The Temple Mount, the birth and name place of their order still remains a fractious meeting point of religions and cultures. Had Abraham cast aside his knife in revulsion at what had been asked of him, world history would have been different. But upon such legends are peoples, nations, empires and civilisations constituted.