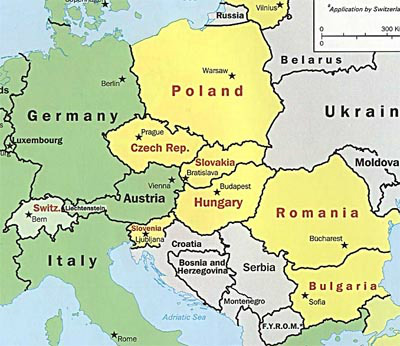 The editorial in Monday’s Guardian newspaper [7 September ‘15] carried the most discreditable headline – The Guardian view on Hungary and the refugee crisis: Orbán the awful. The following article then went on to pillory Hungary’s Prime Minister Viktor Orbán for his attitude towards the current refugee crisis in Europe.[1]

Hungary’s Prime Minister, Viktor Orbán, has set himself up as a bulwark against a generous-spirited, pan-European approach. Desperate people, mostly from Syria, have been blocked from trains in Budapest’s Keleti station, and have been hounded by policemen ready to spray them with tear gas. Refugees have been told that they are at last to be transported further west, only to discover with despair that they are instead being taken to a makeshift camp for registration. ….. the dismal scenes in Hungary will stain one administration’s human rights record – and perhaps the reputation of a nation. ….. Mr Orbán’s hateful statements about Muslims being a threat to “European civilisation”, as well as his ludicrous references to century-old wars with the Ottomans, should be called out for what they are: a disgrace. ….. . They must be countered and denounced. He cloaks his policies in legalistic terms, arguing that Hungary cannot be faulted for strictly abiding by the EU’s Dublin asylum regulations, and yet both the language he uses and the decisions he takes run counter to the very spirit of Europe. EU institutions have failed in the past to hold him accountable for trampling on Europe’s values – now is the time to do so.

By what right has the Guardian, the organ of the British chatteratti liberal-left, to lecture the democratically elected leader of Hungary – a country that knows a thing or two about successfully fighting for and upholding European values – about ‘the spirit of Europe’?  It needs be said that the Kingdom of Hungary was busy representing the spirit of Europe four hundred years before the egregious Guardian first rolled off its miserable presses in Manchester in May 1821.

That petit-Bourgeois rag, the self-perceived conscience of a nation, is in this instance right out of line. Fortunately, far from being awful, the unfortunate Orbán emerges from this disingenuous diatribe sounding like a clarion of reason.

The current crisis, in large part one of the European Union’s [EU] own making – is a highly complex, tragic but logical consequence of a multiplicity of factors not the least being Germany’s arbitrary opening of its borders.

The warning signs of this mass migration have been flashing for some years. Firstly, illegal migration from North Africa to Europe has been a demographic reality for those European countries in the Mediterranean littoral region since 1945. This migration substantially increased in recent years and, consequent to the various wars in Syria, Iraq and Afghanistan and ISIS - the barbarism of Islam gone mad, reached alarming proportions over the past eighteen months.  As these wars, particularly the battle against ISIS in Syria became more intense, so did the volume of displaced persons. To compound matters the United States supported by some NATO countries and, inexplicably, Australia started an extensive bombing campaign in Syria. This provided immeasurable impetus in swelling the ranks of those choosing to leave.

The EU response to all this has been masterful procrastination. Following standard EU precedent, talkfest followed talkfest, amply supported by concomitant hand ringing and sanctimonious declarations of intent. Indeed, contrary to the Guardian’s cant, far from Orbán setting himself “as a bulwark against a generous-spirited, pan-European approach”, his actions amply reflect the singular lack of a pan-European approach towards the problem.

This failure to decide on what action to take has cost the EU dearly – the dam walls have burst.

There now exists a divided European opinion, neatly corresponding to the old Soviet era divide, between those countries of central Europe resolute enough to say what they feel about this mass migration and those countries of Western Europe vacillating on their liberal sidelines. Thus the Czech Republic, Slovakia, Poland, Hungary and to some extent Austria, who it should be remembered, did not instigate the crisis and have generally refrained from sabre slashing in the Middle East, are now the innocent victims of the current migration.

Furthermore, as Orbán has pointed out, some of these countries have suffered under the depredations of the Muslim Ottoman Empire and, unlike Germans, Frenchmen and Britons, they have an historical memory of this period.

Unsurprisingly, they have rejected the EU plan for migrant quotas being promoted by Germany, France and Italy. For this they are undeservingly attracting opprobrium.

Referring back to the Guardian diatribe, it is instructive to look at what Prime Minster Orbán actually said. For this the Reuters news service is a more reliable source.

From Berlin last week, Reuters reported Orbán as saying that the influx of refugees into Europe threatens to undermine the continent's Christian roots and that governments must control their borders before they can decide how many asylum seekers they can take.[2] Concerning the well-being of a polity this would appear to be a perfectly legitimate concern and reasonable strategy. A fairly innocuous comment one would have thought. Indeed Reuters headed its report with a sober and unprovocative headline: Refugees threaten Europe's Christian roots, says Hungary's Orbán.[3]

In an opinion piece in the Frankfurt Allgemeine Zeitung, Orbán suggested that the people of Europe were at odds with the majority of their governments on the refugee crisis.

"The people want us to master the situation and protect our borders," he wrote. "Only when we have protected our borders can questions be asked about the numbers of people we can take in, or whether there should be quotas."

Giving emphasis to his words he added that Hungary is building a 175 km long fence along its border with Serbia to keep out an accelerating flow of migrants entering from the south.

With reference to the cultural demographic mix Orbán continued by stating that his country was being "overrun" with refugees, of whom most were Muslims.

He observed: "That is an important question, because Europe and European culture have Christian roots.” He followed this observation by twisting the knife: “Or is it not already and in itself alarming that Europe's Christian culture is barely in a position to uphold Europe's own Christian values?"[4]

“The problem is not European, it’s German. Nobody would like to stay in Hungary, neither Slovakia, Poland or Estonia,” it quoted Orbán following talks with European Parliament President Martin Schulz. “All of them would like to go to Germany.”

“I only expect the EU not to prevent us from protecting our borders,” He added. “If they let us work, we will solve the situation.”

Certainly Germany aggravated the situation by unilaterally opening its borders and expecting its EU counterparts to do the same. German Chancellor Ms. Angela Merkel presented it as a moral issue: “Germany is doing what’s morally and legally required, nothing more and nothing less,” she said during a news conference in answer to Orbán’s comment. [6]

And it would appear that many refugees are taking full advantage of their opportunity to stay in Germany. The Christian Today reports that one Berlin church alone has seen a ‘miraculous’ growth in its numbers as ‘hundreds’ of Muslim migrants hasten to convert to Christianity. Pastor Gottfried Martens of the evangelical Trinity Church has seen his congregation swell from 150 to over 600 in just two years. He described the conversions to Associate Press as a ‘miracle’.[7]

A more pragmatic answer is provided by a member of his congregation, Vesam Heydari who suggested to AP that: "The majority of Iranians here are not converting out of belief... They only want to stay in Germany."

Given that Germany does not return apostate Muslims, namely those who have renounced their faith, back to their Muslim country of origin for fear of punishment, this is a telling argument.

The aforementioned is but a small sample of the complexities of the migration crisis. The Hungarian leader has spoken on behalf of his country. For doing so he and his country are being treated unfairly.

What Germany et.al. are ineffectually trying to effect are stopgap measures. The problem lies at the source.  And herein lies the rub – and NATO Europe hasn’t the cahoneys to address that question seriously. Hand-wringing and sanctimony is cheap. Effectively addressing the question comes at a serious cost.

There obviously exists a problem – fix it. Under the auspices of NATO the EU, ignoring the somnolent and morally decrepit UN, now has the excuse and the opportunity to get into Syria – create safe havens, build decent refugee centres, protect them properly and then set about to systematically eradicate IS and anyone else who offers resistance. Learning from the lessons of the cockup that was Iraq it should then be prepared to rebuild Syria.

NATO needs the moral conviction and the cahoneys to face-off Russia over Syria; it needs the resolve to sacrifice lives in the name of humanity and it requires the resolve to stay in for the long haul. It is difficult to imagine the limp-wristers of NATO and/or the EU agreeing to that. The prevarication whilst Yugoslavia burned comes readily to mind! Likewise the current piecemeal approach of bombing and arming select groups in Syria, poncing about Obama-like, is as cowardly as it is arrant nonsense. NATO should either do it or not. If not, the EU should suffer the consequences, specifically, refugees and illegal migrants; or it should be prepared to pull up the ramparts and ignore the slings and arrows of despair. Period.

To conclude where we started - at the question of the Guardian and Prime Minister Orbán. The issues are far too complex to be lightly dismissed by the Guardian’s emotive diatribe. The Hungarian leader speaks for his people and for many others in a Europe writ large. His is an opinion that is as reasoned as any other – perhaps more pragmatic than some - but an opinion forged in a country that is still enjoying its flush of freedom from political tyranny.

Hungary is a proud and noble country with a long tradition of fighting for its political and cultural liberty. Its historical memory of this fight includes the abject Western capitulation in the face of its courageous but unsuccessful 1956 uprising against communist oppression. In this light, it does the Guardian no credit to insult the democratically elected leader of such a distinguished culture.

20 million refugees around the world and they are all heading toward Western Democracies and the Left Group think consider the Judea Christian countries are to blame. It's baffling.
Great article.

Anything that appears in the Guardian is wrong and evil by definition. As you suggest, Hungary is an historic bulwark of Western Civilization.

Housing refugees in safe havens in their own country and getting fair dinkum against ISIS is the most sensible solution I've heard. Merely throwing open borders is fraught with danger.